So I did it, and it went well!

This past Tuesday, Wednesday and Thursday was Icon, the biggest annual Israeli Sci-fi and Fantasy convention. I opened a nail art booth with all kinds of geeky designs. I posted a teaser last week with my superhero wheel, and now I'm back with the rest of my designs.

Sadly, I wasn't able to bring a camera with me to the convention, so I only have photos of my sample wheels. Hopefully next time I'll be able to get a camera! Especially since there were customers who had me do designs I didn't do samples of- one girl did all ten fingers with Disney princess themes- an apple for Snow White, a glass slipper for Cinderella, etc.

Two other things of note, before I begin the picture spam: One, I had plenty more ideas than I actually created, so if there are some gaping holes in my geekdom please forgive me! I'm hoping to have a more comprehensive set of geek designs by the time the next con rolls around. Two, this time I partnered with my friend Hannah, and some of her designs will be featured here. Starting with the geek basics of course, Star Trek and Star Wars! I wouldn't be the geek I am today without these very powerful influences in my childhood. Plus my parents met at a Star Trek convention, so there's that! It's in my DNA and everything!

(I don't know what happened with that Darth Vader nail... I'm gonna have to redo it for sure.)

Hit the jump for lots (and lots and lots) more designs! 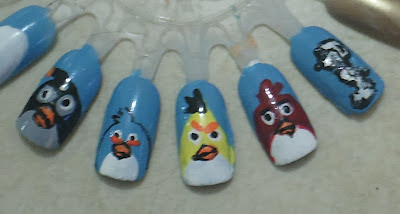 I just got a tablet. Since it was my first real exposure to a touch-interface device, I of course promptly got addicted to the Angry Birds app that came preinstalled. And since it was so addictive, I had to do angry bird nails! Cameo on the right of a Snoopy doodle Hannah did. 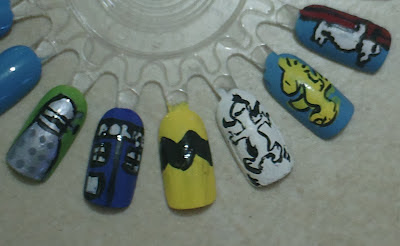 Snoopy and Doctor Who nails! The rightmost nail is upside down, it's Snoopy lying on the roof of his dog house. The TARDIS was far and away the most popular nail- people would stop at our booth and just start squealing- men included! Doctor Who is getting really popular in Israel these days, so I'm not surprised. 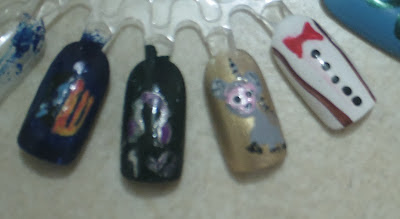 More Doctor Who- the leftmost by Hannah, the rightmost by me. In between we have a random monkey and a... thing? I think it's headphones? by Hannah again. 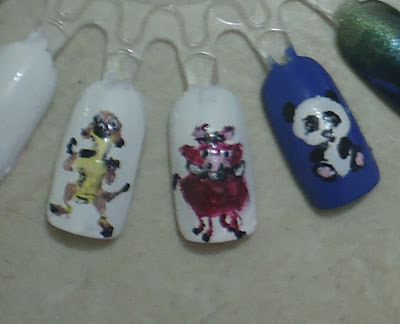 Now we're really getting to see more Hannah designs- Timon and Pumba, which drew a lot of people to the booth, but oddly only one person actually got them done, and a panda, which was very popular among little girls. 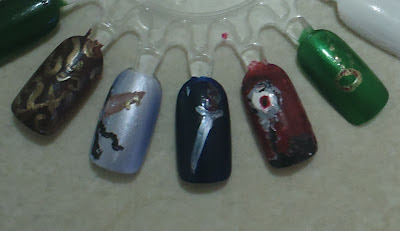 Lord of the Rings set, by Hannah 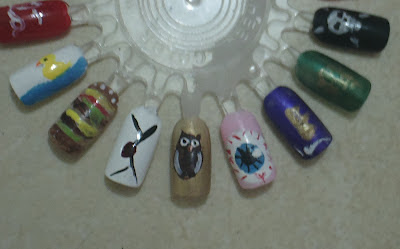 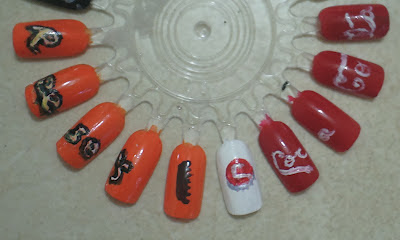 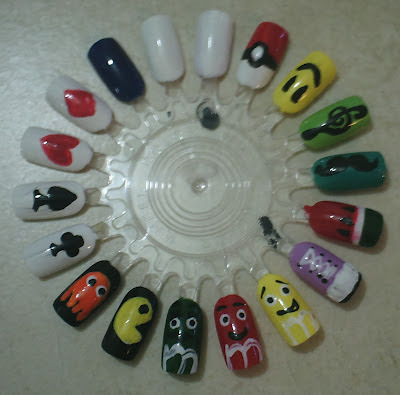 And finally, last but not least: 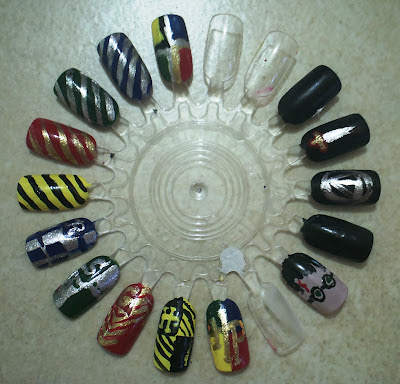 Harry Potter nails! I did these in my downtime during the con, so it's slightly incomplete- the two remaining black nails were supposed to be the Dark Mark and...something, I can't remember what. I didn't get the time to finish them though. I'm especially proud of the Hufflepuff nail (the more complicated one). Hufflepuff house pride! (I actually consider myself a SlytherPuff, but that's a story for another day.)

That's all for today! I hope to continue doing new nail designs, and sharing them on here. There's another convention coming up in the vicinity of December. I'm not sure I'll make it to that one (it's Anime, and I don't have much Anime in my repertoire right now) but I'm gonna do my damnedest to get there!
Posted by FedoraHarp at 7:42 AM