So like nearly everyone else on the internet these days, I've been fangirling like a boss over The Avengers, specifically over Loki. Well, specifically over Tom Hiddleston. If you'll allow me a hipster moment, I have kind of always had a thing for movie villains*, so I guess this is pretty predictable for me!

Also, I've always been a Slytherin at heart, so even though Slytherin is green and silver, I do love me that green-gold motif. I'll probably do a lot of green-gold nail art and jewelry over time.

More pictures under the jump

I mercilessly filed my nails down recently, now they're the shortest they've been since I stopped biting. Why would I do such a terrible thing? Sadly, having long nails sort of interfered with playing the harp. A little. Well, a lot. I hope eventually I'll figure out how to play the harp with long nails, but for now they keep getting caught in the strings and end up making a horrific buzzing sound. And when they get caught too far in, it hurts!

So. Short nails. That still doesn't excuse the pink, but I decided to try it out. It's only barely pink, anyway, it's seriously blackened. 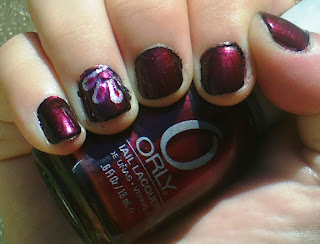 I have to say, having short nails makes it much harder to be neat. I've pretty much mastered the technique of applying polish without needing any cleanup, but somehow with short nails that all goes out the window. Also the topcoat completely smeared my design. It's frustrating, because I waited around twenty minutes before applying topcoat and this *still* happened!

I used one coat of Orly Moonlit Madness over black, and the silver is a no-name brand which I love to use in marbling. Oooh, maybe I'll try marbling next! It's been a while since I've done that! It's also been a while since I seriously sat down to make jewelry. I should do that too.

I think my ADHD is coming out. Now I'm in the mood for potato chips.