Coming up soon: Convention, round two!

It's been ages since my last post, mainly because I work at a cafe at the moment, and 99% of the time when I get home my nails are destroyed. Polish doesn't last more than a few hours in this line of work.

HOWEVER! I have managed to do some swatches, which I will be posting soon. And more importantly, I'm doing a convention!

This past Passover I opened a nail art booth at a Sci-fi convention, and now I'm going to do it again in a month or so from now. I've begun preparing nail wheels to showcase my work, and today I'm posting the first one. 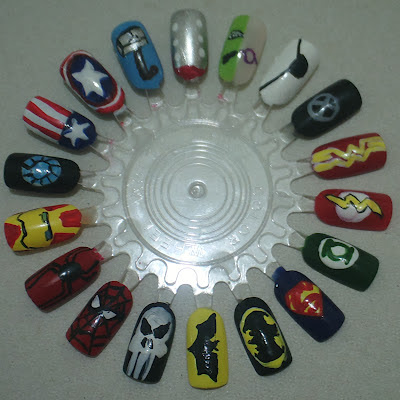 This one is superhero insignia, predominantly Marvel because I'm kind of a Marvel fangirl :D I'll probably do at least one more comic-oriented wheel, although that'll be a mix of villains and heroes. We'll see if I even spill over into a third. In the meantime, there are lots of geeky but not-comic things coming up soon- I'll post them as I finish them!

What do you think?
Posted by FedoraHarp at 10:59 AM No comments: