I'm finally getting on with this collection! Only four more to go after this.

I decided to dive into the redheads of the family, since these colors seem to be a good representative of the weather around here. 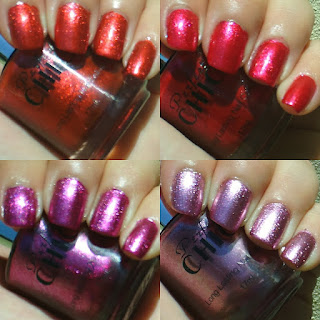 Unfortunately, my sunlight pictures all came out on the blurry side, I'm still getting used to my new camera. On the bright side (no pun intended!) pretty colors!

Individual swatches and reviews under the jump.

Hi all! NOTD and then a quick update.

So this is a set of Chic Metalix under a lovely black crackle that I've worn here before by a German brand called P2. Not everything in this picture has been swatched yet , but they're coming!

Life update under the jump:
Read more »
Posted by FedoraHarp at 1:06 PM No comments:

I think this is an appropriate subject for my "triumphant" return to swatch posts, as in "Wow, it's been ages since you did a swatch post!"

Well yeah, it has. I don't really have any excuses either. I know I'm going to have to retake a large number of my swatch photos- looking back at them over two months later, I'm not really happy with any of them. The ones from WOW are ok, hence this post now.

So here's the deal with WOW cosmetics: They're a domestic brand, and they have some really affordable cosmetics, plus their spread of polish colors is interesting. They don't have a ton of colors yet, but from what I've seen I like what they have.

I have three for you today: 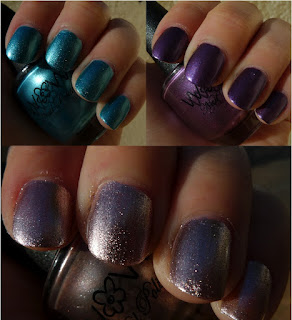 Well, I just made a breathtakingly bad life choice!

Hi there, my darling nonreaders.

Let's skip over the "omg I haven't posted in aaaaages!!!1!!one!" formality and conclude universally that I'm a lazy failure at life, without the pretty words.

I might post some swatch pictures I have archived tonight. I might not. I hope so though. But that's not why I'm here right now (also I'm at work, so no access to those pictures anyway).

I bought a camera today. You see, apparently my credit card company was supposed to have been offering me all these deals for the past six years, but somehow I slipped through their cracks and never got any of the discounted crap they are constantly bugging their other customers about. So now all of a sudden they woke up and realized hey, in six years people rack up a HUGE amount of points even if they have pretty modest spending habits! And woah, most of those points are expiring soon! We'd better offer her something fast!

So offer they did. And stupidly, I accepted. Most of their potential offers were boring but practical things like towels and vaccum cleaners, but the camera was something else. I've always kind of wished I'd gotten in early on the whole youtube vlog thing, because back when that kind of thing was just starting out, I actually had an interesting life. It could have been a fun diversion.

Now? Now I'm almost 25 and I've done virtually nothing interesting with my life whatsoever. On the surface it seems like I should be cool: I have a harp, I make jewelry, I do nail art (even geeky nail art!), and I'm a geek, which is apparently what the cool kids are these days. But in practice I'm about as boring as dirt, because I get lazy or depressed and spend most of my time derping on the internet looking at all the interesting stuff other people do, instead of doing it on my own.

A camera could change that though. If I learn how to trick my own psyche well enough, I could actually guilt trip myself into having a life. I could start a vlog! Then if I actually stick with the commitment of posting once per (???) I'd have to actually do stuff worth talking about on camera. If all I have to say is "well, I got home today and read some fanfiction, then I scrolled through tumblr for a while, then I prepared some frozen shnitzel for dinner and went to sleep" then I won't be able to make a vlog. And if I don't make a vlog, then the money I spent on my camera will have been wasted. And that is just sad, considering it's A- a really good camera, and B- a really expensive camera. ($1,125 before the discount, $460 after. No I could not afford that even post mega-discount. At least it's in installments...)

Alternatively, I could guilt trip myself in practicing harp frequently enough to occasionally record and upload music. Or do tutorials in something, meaning I'd actually have to clean my room.

What I guess I'm trying to say here is: This blog will no longer be solely for nail polish and jewelry.

"But Leah," none of you say, "Don't you already have a personal blog?"

You're absolutely right, nobody! I do have a personal blog. But consider the fact that it is embarrasingly derpy and fangirly, and I'd like this one to be more of a thinking blog. Or at least a derping eloquently blog (fat chance). I might crosspost things now and then, if it's pertinent to both blogs.

It's entirely possible that this project will be abandoned within a week. Or a day. I can tell you that not having a life is freakisly boring, but it's so easy! I don't know if I have the willpower to stop being boring. But I'm sure as hell gonna try, or at least convince myself for the next few hours that I'm going to try. It usually goes right out the window the second I get home (fandom is really difficult to pull away from, you guys).

I have to stop rambling now. It's long over time.

Hey you! If you actually read this entire thing you are my new best friend. Have a cookie!