It's my inaugural swatch post! Well, technically that was yesterday. But that was a disaster, so let's have some selective amnesia and focus on the actually good swatches! 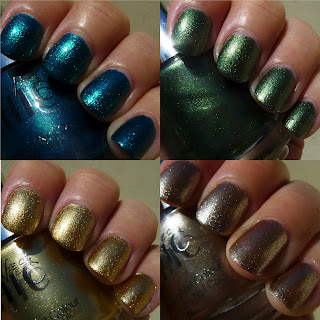 Allow me to introduce you to Perfect Chic, another domestically-produced brand. It's actually manufactured here too, which cannot be said for Jade (or Life, which I'll get to in another post). A large portion of my collection is composed of Perfect Chic polish, for a couple of reasons. One- they're affordable, without being crappy quality. Two- they have a really nice range of basic colors. I've had to fill out the basics a bit with some other brands, but for a long time after I started collecting polishes, it was almost entirely Chic.

This particular set is from a line which they call "Chic Metallix",  although that might be a slight misnomer- they're not so much metallic as densely packed glass flecks (I'm going to say "microglitter" for the rest of the post, but I think they're really glass flecks), with varying levels of frosty finish. The end result is rarely metallic, although it is quite shiny. So far I only have four from this collection, although I plan to eventually get all of them, even the pinks! I think there are ten in total, although it could be a couple more.


This color was the dark horse of the bunch- I bought it expecting it to just be another gold, something to fill out my marbling collection (I almost exclusively use microglitter when I marble). It really surprised me on the nail though! I think I actually said "woah" out loud the first time I wore it. This is a subtle, classy champagne, which doesn't so much pop as very politely demand your complete attention. It's fairly warm for a champagne- I wouldn't say there's pink in it, but it's perhaps been acquainted with one in it's distant past. This is good for short nails too- I don't like to wear pale colors when my nails are short because they tend to make me have stubby hands, but this one actually works. This color could be worn with a little black dress, or to work, or pretty much anywhere. It's extremely versatile. It's smooth in one coat, and completely opaque in two. 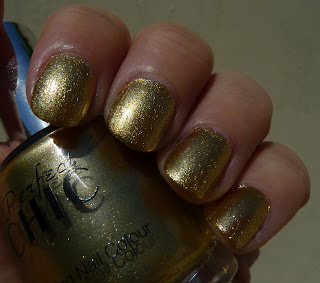 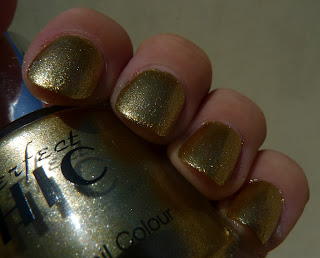 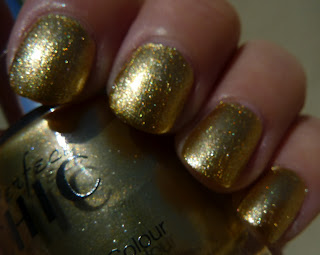 Unfortunately I didn't get a good indoor pic of this color, so these are all in sunlight. the last one is a little blurry, so you can see the multicolored glitter a bit better.

This one is a fairly run-of-the-mill yellow gold- I bought it as filler, once again. I generally don't wear plain gold, although it finds its way into my nail art frequently. Yellows in general make my skin tone look terrible, so I stay away from them as a rule both in clothes and polish. For what it is, I like it, but this is the kind of color that would probably work better on a darker skin tone. This is opaque in two coats. 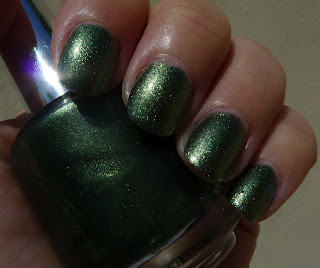 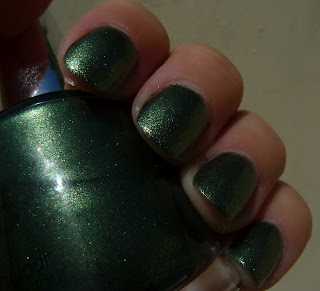 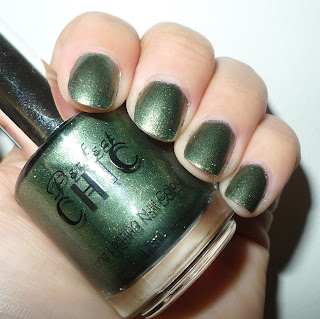 This is an occult, witchy sort of green. At the right angles it flashes yellow, although it's more pronounced in the bottle.  I like the subdued tone of it. Of all of the four Chic Metallix I have, this one has the worst formula- kind of runny, and very sheer. It builds ok, these pictures are three coats. It also takes the longest to dry. The color is very pretty though, so I'm willing to put up with its flaws. 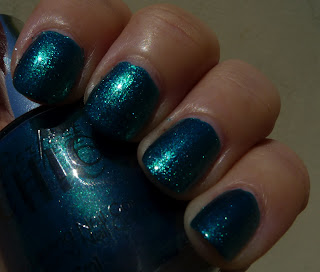 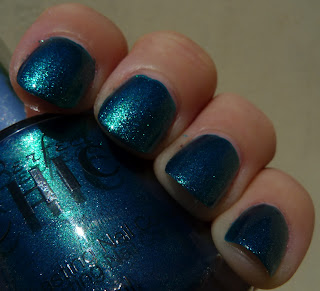 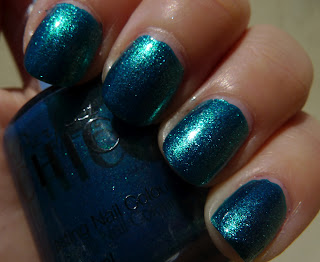 Aha! And now we have come to my favorite color of this group. Actually, my favorite color altogether- I have always had a huge weakness for things on the blue-green spectrum. The polish is actually a bit greener-toned than it's showing in the pictures, I encounter this every time I try to photograph it- I don't know why! This color was what prompted me to start buying the Metallix collection in general, it was too pretty to leave on the shelf. It has a juicy jelly finish, more so than the other colors in this set. And paradoxically, it's also the most opaque! I could get away with one coat of this for most nails, although I usually do two anyway. This one also borders on a duochrome- I don't think it's properly duochromatic, but it's distinctly greener at some angles and distinctly bluer at others.

The one downside to this polish is that it's a touch intense to wear in a formal setting, which limits my options (assuming I care to follow social norms that day, heh.) This is solved easily enough by putting on a matte topcoat, which I've done on occasion. Also, this would look BADASS under a black crackle. I hopefully should be getting some in a couple of weeks, and yes there will definitely be pictures!

Cons-
So the overall consensus is: I like this collection! It's a very versatile set, excellent in marbling and good in nail design, but the colors are interesting enough to stand alone for the most part. I would definitely recommend picking up a couple if you have the opportunity.
Posted by FedoraHarp at 12:34 PM