NOTD: Butterfly wings- and a comparison!

Okay, so the "nail of the day" thing is a bit of a misnomer, considering I took these about a week ago. I even have pictures for another entire post prepared, and I'm gonna try to get those up some time this week. A modest goal, hopefully, but we all know my track record.

Anyway! This is the first time I've used acrylic paint in a design on my own nails, so that's a milestone. Did I mention that acrylics are a dream to work with? They're not good for everything, but for this kind of picture they're so much better than regular polish. I do wish I had a better range of colors, I guess that'll add up over time like my regular polishes did. 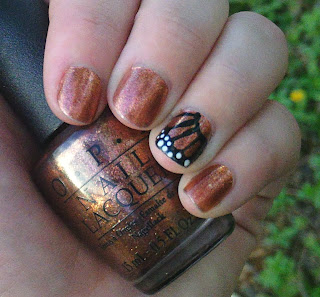 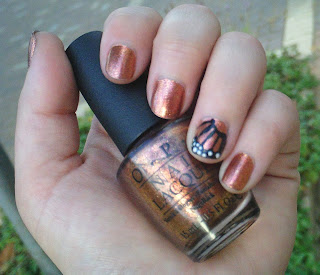 Surprisingly, my right hand turned out quite well too. As you can see, I still need to work on my control over the paint when working on myself, but I'm sure I'll get the hang of  it quickly. I already work with it on other people/nail wheels much more effectively than I did with polish.

If you'll notice, the OPI I'm wearing (Sprung) is suspiciously familiar to GA-DE Tangerine Garnet, which I swatched in my last photo post. I did some comparison shots, click the jump to see them!

As you can see, this was taken on a different day- different lighting, and my cleanup leaves a lot to be desired. Still, the nail color itself is pretty true-to-life, so ignore the wonky skin colors I guess?

The two polishes are basically identical. They have the same distribution of glitter particles, the same finish, the same consistency. Tangerine Garnet is a tiny teeny bit warmer, and it was somewhat more opaque- it took me three coats instead of four to build to opaqueness.

Oddly, I'm not disappointed that they're dupes, even though I bought Sprung second, and it's far more expensive. I guess I loved this color so much that I bought it twice!

I actually have a couple of other comparisons to share, which I believe I'll do in my next post. I've already taken the photos, but this way I get two posts for the price of one!

Two more quick things: I have Essie's Smokin' Hot (oddly misnamed, it's a dark greyed-out violet) on my paws right now, no art. And man, I forgot how much I love creams! It's so glossy and classy feeling. My outfit today was perfect for it, too, I felt both delicate and feminine and very mature, like I could take on the world. I'll have to wear that outfit again soon and take a selfie (I don't do those!)

Also: I've decided that I'm going to reorganize my nail art. I've begun compiling a list of designs, and i'm going to plan it all out in advance, keeping fandoms together and organized by type. I'm also going to do it with acrylics mainly, so there should be a noticeable quality bump there! I'm not getting started on it right away, but I'll share each wheel as I finish it.