Galaxy nails are a pretty essential staple in any nail artist's lexicon. They're relatively easy, and the result is really impressive and pretty hard to mess up. I'm really happy about this, because I love that it's a style that's accessible and fun to do. But the downside is, how do you do a fresh take? There are unlimited ways you can mash together different colors and nebula patterns, but after a while they all start to look the same. I thought of maybe doing a pastel galaxy, which I thiiiiiink was fist thought up by The Nailsaurus, but even that's gotten pretty popular. I'll still probably do it at some point (nothing wrong with doing a well loved style), but here I wanted to stand out. I decided to go with red galaxies, since I don't recall seeing any like that around. Of course, the nail art world is HUGE, so someone has probably done this before somewhere, but at least it's fairly unusual!

I took a ridiculous number of photos of this mani, but I also started preparing this post late at night, and I so don't have the energy to crop and watermark and edit a bajillion photos, so I'm just posting the ones I did before I burnt out. I did try a matte topcoat, and I edited one of those photos too, but in the end I think I like it better in the original glossy finish. 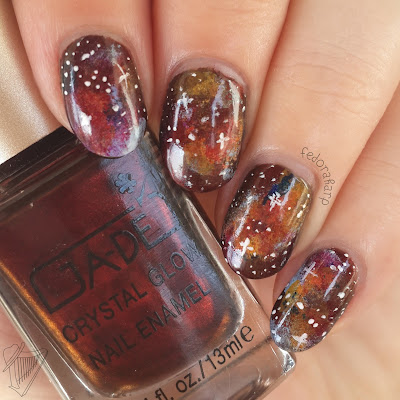 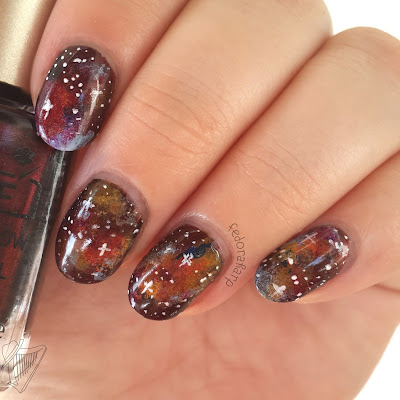 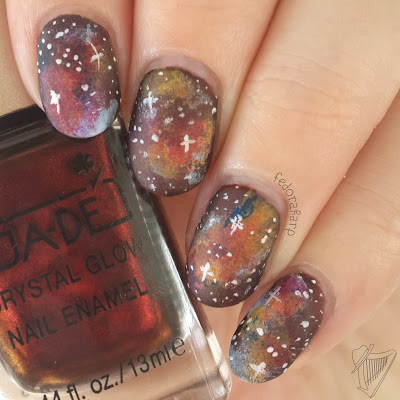 I ended up using entirely Ga-de polishes for this manicure, not sure how that happened!


An InLinkz Link-up
Posted by FedoraHarp at 12:49 AM