Hi there! I took some pictures of stuff I made today. Some of it is new, some of it is quite old. The truth is, these pictures are going up more to work on my photography than my jewelry. I'll have to take a lot of photos in order to get better at it. I'll tell you a little about each piece as it goes up.

I tried to take everything in natural lighting, but when I put stuff directly in the sunlight, except for a few exceptions, it was so full of glare as to be unusable. Next I tried slightly off to the side, in the shade, and that seemed to work- except that I had to position myself and my camera so as not to block any more light than necessary. Flash is completely out of the question, of course, but in one picture I accidentally forgot to shut off flash and it came out ok. The other times that I left the flash on came out pretty much terrible.

I took all of these on the floor in the living room, right near our picture-window, but hopefully you won't be able to tell... 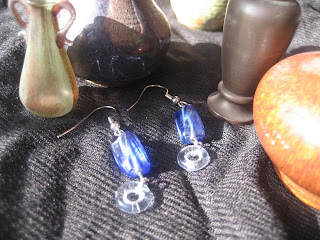 This was the only picture I took in direct sunlight that I thought was good enough to post. I made these earrings about two years ago, using a slightly experimental technique- I won't repeat the exact process again because it came out a little clumsy, but I've used similar ideas with later projects. 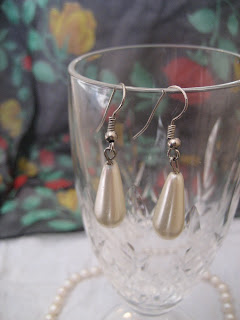 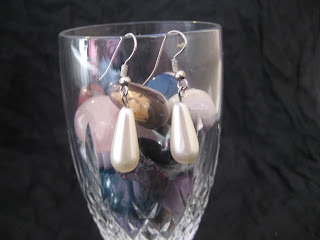 This is one of the first pairs of earrings I made- about three years ago? They've been handled pretty roughly, you can see it a little. I wore them almost on a daily basis for awhile, and then I would transport them around in a rough bag with things like safety pins and other scratchy items. I need to take better care of them! I took two pictures becuase I was trying out different display techniques. Actually, I took several dozen pictures of the same earrings in different setups and lighting schemes, but I liked these two the best. 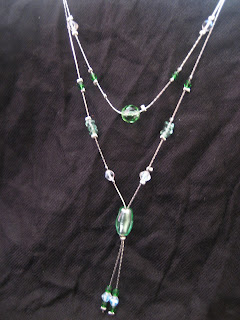 This is the necklace half of a set that I made for my friend's birthday [note: soothing_sight, for those of you who know her]. For some reason all of the pictures of this set came out kind of blurry- probably becuase there was no flash. I need to find a better way to steady my hands while I snap the picture. I'm sending this off in two weeks, so I'd better hurry up and get better shots! This is my first attempt at making a necklace that involves crimping beads and this kind of chain (it's not Tigertail. What is this stuff called? Help?) 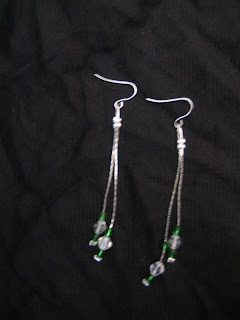 Here are the matching earrings. I'm not going to bother enlarging the picture becuase it came out pretty awful. In person they are really nice though! 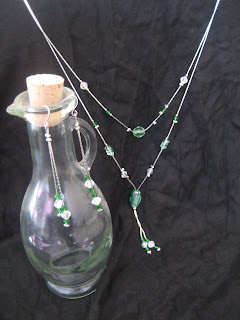 This is both of them together- for some reason this one is less blurry. 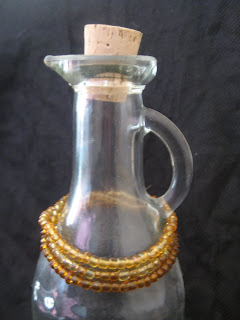 Three small bangles that I made- originally there were eight of varying shades of this color- beer? What color is it?, but I lost the other five. I'd love more of these beads, I used to wear all of them at one and they matched practically everything. They would be too small on anyone else, because I made them for me and I have really tiny wrists. Regular bracelets fall right off of me.

The next four pictures are two necklaces displayed with and without some decorations, I can't decide if the decorations are worth it or if they distract from the necklace itself. Opinions would be helpful! My mom thinks that the decorations add something, I think they kind of draw your eye away from the point. 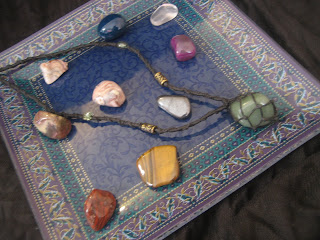 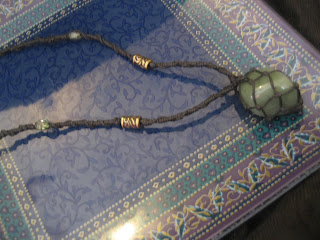 This is the first necklace I've ever made in this kind of ropey style- I kept it for myself. Since then I've made quite a few of them as gifts for various people, and I've wanted to try this with a thinner rope and smaller stones, but I haven't been able to afford a spool of thinner rope yet. I have also experimented with different starting techniques as opposed to a net that covers the whole stone, but this one seems like it's the sturdiest and the stone will never fall out. I'll keep experimenting though, see if I can come up with or find something that displays more of the texture of the stone. 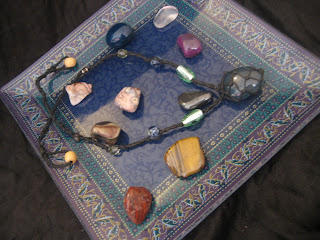 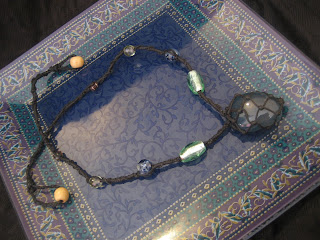 My parents originally commissioned this one as a gift for someone, but it was deemed too chunky, so I kept it for myself and made a more delicate one for the gift recipient. I have a picture of that one somewhere, but it's not such a great quality shot. I'll probably post it at some point though, along with some other old pictures of jewelry that I don't have anymore.


I made a Tigertail necklace today that's supposed to sit right on the neck, but since I have a really small neck it doesn't. I'm trying to figure out a graceful way to display it. I'm making more stuff every day so hopefully this little picspam will be the first of many!

I'd love to hear your thoughts, dear nonexistent readers :-)
Posted by FedoraHarp at 4:07 PM