I got China Glaze Twinkle Lights as a gift from a friend not too long ago. Now, it's a fairly Christmas-y color, which leaves me with two dilemmas: One, it's the summer, and two, I'm Jewish.

So I decided that since green and red and yellow are all kinda summery colors (especially when they're vivid), this is going to be a summer color. I actually have a summer dress that's nearly perfect for this polish, I'll post pictures at some point.

I've never done a glitter gradient before, but I really like how this one turned out, so I'll probably do it again in the future! Perhaps a full nail gradient too (I just picked up Revlon's Blue Mosaic today, it looks like that would be excellent in a gradient) 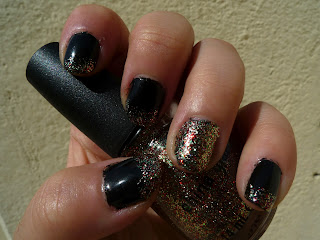 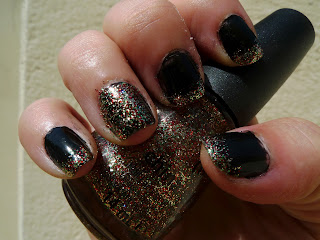 One frustration with this is that the black jelly I used was really difficult to work with. I don't think it normally would be, but the polish deteriorated after I did that booth a month ago and it sat in the sun for hours and hours :/ It's a pity, this was a really pretty black, for a nameless brand. It had a great jewel-tone feel. It still does, but now it takes a lot of effort to put on properly. I got myself a new black today, but when I got home I discovered it was a cream. I'll have to deal :P

I'm planning to go watch the Avengers when it's available in theaters here, and I'm going to be doing Avengers-themed nails to commemorate the occasion. It might be a good while before that happens (work is busy) but keep your eyes opened for that!
Posted by FedoraHarp at 6:29 AM