Gradients are pretty much a staple for me, so I had to think a bit on what I wanted to do to keep it fresh for the challenge. I decided not to get too complicated with it, and I'm pretty happy with the results. There are some flaws and my cleanup is far from perfect, but I'm still pleased with the overall look.

Also- this took fifteen polishes to achieve. Three shades for each nail. Plus the rhinestones of course :) 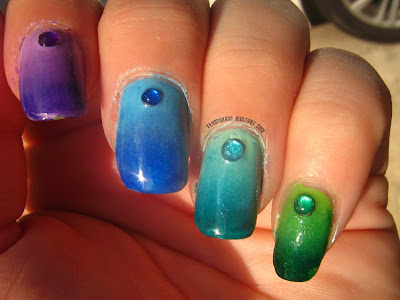 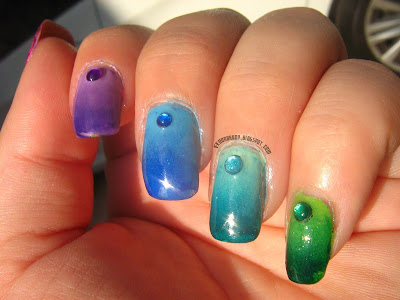 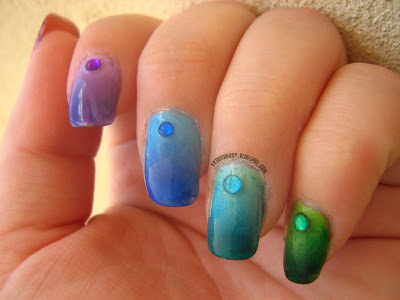 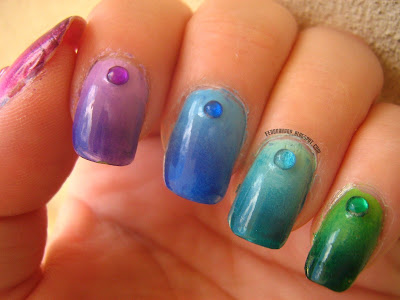 Funny thing about rhinestones: I haven't worn them in a really long time. When I fiiiirst started getting into nail art ages ago, I tried to incorporate a couple into one of my early attempts at freehand. It was awful- I was constantly misjudging my hand placement because I wasn't used to being careful where I put my nails. The would get stuck in my hair, I was constantly picking at them, the whole deal. So I decided that they simply weren't for me and scrapped any future plans to use them.

Now, years later, I try them again- and I'm just fine. I barely even noticed they were there, aside for going "oh hey, my nails look cool!" I guess in the interim I've become a lot more spatially aware of my nails, so I know how to deal with bumps. Also I wear texture polish every now and then, so that probably helped desensitize me. Well, I'm definitely going to use them in future designs!

Edit: HANNAH'S BACK! She hasn't had time lately to participate, but today she sent me a picture for gradient nails, so here it is (added in while I'm at work, so unfortunately no watermark) 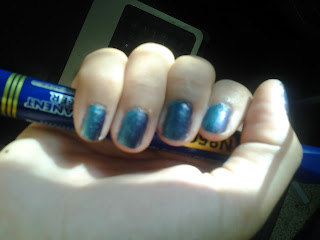 She was in a bit of a hurry, but I still like how she made it look almost like a duochrome effect. Hopefully there'll be more from her as the challenge goes on :)

To see who else contributed today, click the jump!